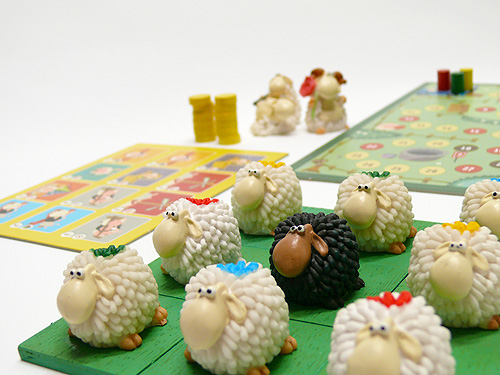 When I first saw Shear Panic! by Mayfair Games with its cute Wallace-and-Gromit-esque game pieces, I thought it must be a game for children. Shortly after beginning to play, however, I discovered that this strategy game is designed with both adults and young adults in mind and is a good choice for a game night with family and friends.

A flock of sheep including two for each player and one independent black sheep, push, jostle, slide and turn to get to the highest scoring positions in the flock. The highest scoring position changes during each of the four phases of the game. During the first phase the goal is to flock your own sheep together and scoring occurs during each player’s turn. During the second phase all of the sheep turn their attention to the handsome, red rose carrying Roger the Ram. When the marker that tracks the progress of the game reaches specific points, the sheep closest to Roger score the most points. The third phase is similar to the first phase, only now the goal is to be next to the black sheep in the flock. In the final phase, sheep are mercilessly pulled out of play to be sheared. The longer you can avoid the shearer, the more points you will gain.

Each player is limited to 12 different moves, so you may want to save your most powerful moves for higher scoring phases two and four of the game. My favorite moves are the "lamb slam" where one of your sheep gets to move in any direction pushing all of the sheep that get in its way, as well as the "ewe turn" that rotates all of the flock 90 degrees to the left or the right. This can either really mess things up or provide instant benefits during phases two and four, since Roger and the Shearer also get moved to their proper position in front or back of the flock.

I played this game with a group of four and found that even with the most careful thought as to your strategy, with each player’s move unexpected events would occur and sometimes even huge reversals as to who had the best positions in the flock. This helped to keep the game fun, interesting and balanced and prevented any one player from dominating the game. I would imagine that a two player game would be somewhat different and would even allow a bit more control over your strategies. This game is suitable for 2 to 4 players, ages 10 and up. I’m definitely looking forward to playing Shear Panic! again at our next game night! 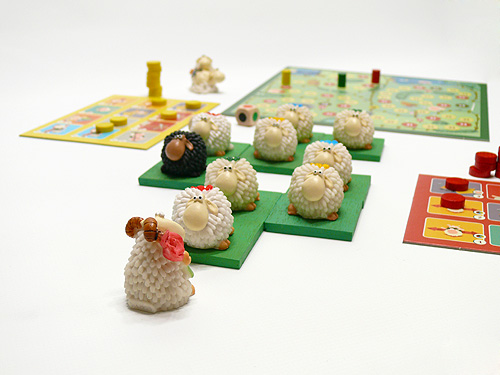 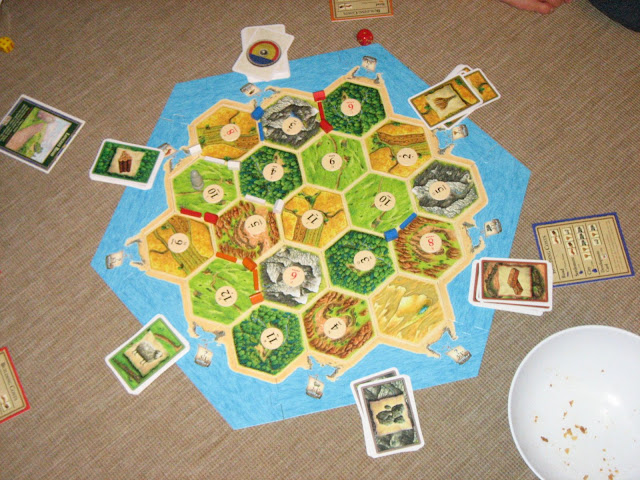 One night be phone rang and when I picked up my cousin said, "Hey. Come over and play this nerdy board game with us!" and looking for an excuse to nurture my inner nerd I agreed to go. When I arrived I saw what looked like a really complicated game being set up. My cousin was in the corner with the instructions, brows furrowed and shouting random things about the game to us as we inspected all the various parts and pieces. Needless to say that we were not experts at strategic Eurogames, but I had heard that The Settlers of Catan was a good place to start so we set up, sat down, and started to play.

Catan is a game based on strategic placement of settlements, roads, and cities with the goal of acquiring resources to build more settlements, roads, and cities. A specific number of victory points are attached to each item (1 for settlement, 2 for city) and points can also come from other places (like having the Longest Road or the Largest Army) and the first person to 10 victory points wins. Gathering resources proved to be a game of chance and strategy as the roll of the dice determines what resources are to be collected, but the placement of your buildings determines whether or not you get to cash in on the roll. My first two settlements were both placed adjacent to Wheat fields both under the number "8" disks. So everytime an "8" was rolled I would get two wheat cards, and when I replaced one of those settlements with a city I would get three (having a settlement gets you one card, having a city gets you two). Inadvertently I had monopolized the Wheat market which proved to be quite useful when bartering.

The true character of your friends and family really comes out during trading. Those who are demanding and stingy usually make enemies pretty quickly, but their ruthlessness can end in victory. Those who are too generous usually get walked all over, but they worry less about getting stabbed in the back. I was careful not to make enemies too quickly, but I did do one pretty vicious play that gave me quite a rush.

In the game there is a robber who not only steals half of your cards but also camps out on your resources and prevents you from collecting. When a player rolls a 7 everyone with 8 or more cards loses half their cards, and the player gets to move the robber wherever they wish. In addition there are knight cards that allow you to move the robber and to steal a card from the adjacent settlement or city. Towards the end of the game my brother and I rolled a 7 (we played on teams since there were so many of us) and negotiated that we wouldn’t move a robber to a certain place if that team (who was winning) would give us some absurd amount of ore, then we immediately used the knight to move the robber to that spot and took another card from them. Mean, huh? Well, they won anyways so don’t feel too bad for them.

Overall we throughoughly enjoyed the game, and even though the rules are more complicated than your typical "roll and move" board game it is easy to catch on once the game gets going. We’ve "settled Catan" a couple of times since then, and even though I may not know much about Eurogames, I have to say I have joined the masses that adore playing The Settlers of Catan.

The popular board game Carcassonne by Rio Grande Games is an excellent way to introduce yourself to Eurogames. The object of the game is to build roads, cities, fields and cloisters by drawing tiles, to control what you build with your game pieces or "meeples", and then to build as large as you can to gain the most points. Your success in the game is partly based on strategy and partly based on what random tiles you happen to draw. During one recent game, I was able to build a huge city worth a lot of points, but could not draw the one tile I needed to complete it – argh!

Part of the appeal of Eurogames are their well-designed and appealing game pieces. The well-illustrated tiles included with Carcassonne are based what you would see if you visited the medieval southern French city of Carcassonne. This ancient walled city lies on the banks of the River Aude and its 52 towers and 2 rings of town walls makes it a popular destination for travelers. Carcassonne has no game board – as players draw and place tiles during play they create their own unique game board with medieval cities and surrounding countryside.

The game takes about one hour to play, and is suitable for players ages 8 and up. The standard edition of the game is good for 2 to 5 players, but if you like more strategy and less randomness, then you will likely prefer this game with 2 players. With the addition of the Inns and Cathedrals expansion the game can accommodate up to 6 players.

The most difficult part of the game is learning how to keep score. Score is counted for cities, roads and cloisters that are completed during the play of the game. Once these are completed, a player’s game piece or "meeple" is returned to its owner. All fields are scored at the game’s end.

If you like Carcassonne, there are several expansions available that add new rules, tiles and figures to the game. Many of these are compatible with each other and can be played together.

This is an excellent game for friends and family that is simple to learn and moves along fairly quickly during play. You don’t have to think too hard to play it, so even your friends that are not game-geeks will like it. Carcassonne won the prestigious Spiel des Jahres (game of the year) award in 2001 and is on its way to becoming a classic.

If you are like me, you don’t have much patience for reading through pages of rules to learn how to play a game, instead you prefer to jump right into it and learn the ropes as you go. So when I first opened the box of Family Fluxx and found that this game only has one rule I was intrigued: draw 1 card and then play 1 card. I think I can handle that, but is it any fun??

The first time I played, the game lasted only about 3 minutes, with my opponent drawing the one card from my hand that would make me win the game. I wondered why the box said that the game lasts from 2-30 minutes, so I guess I got my answer. The second time I played, the game went on for about 1/2 hour. This time frame, plus the compact size of the game itself and the fact that as few as 2 players can play, makes this a very fun way to spend a lunch break!

The only thing that remains the same about Fluxx is that it is always changing! New Rule Cards are constantly played that can void the old rules and in an instant turn the game in your favor or maybe even your opponent’s favor. Action Cards affect what happens on one player’s turn, and Keeper Cards can help you win. The goal of the game changes each time a new Goal Card is played and there are 17 different ways to win. I found this game to be a great diversion and an upbeat way to spend a modest amount of time.