Modern demonstrator fountain pens are clear, or partially clear writing instruments that allow you to see the inner workings of the pen. Originally, the purpose of these pens was for pen manufacturers or pen sellers to show-off the desirable mechanisms of the pen that were not normally visible from the outside. They were not meant to be sold to the public. Some old demonstrator pens were non-functioning and even had holes cut into the barrel. Eventually, clear plastics came to be used to create very limited numbers of these pens and they became sought after by collectors. Their popularity grew, and now they are commonly used by many as daily writing instruments.

There are many reasons writers are attracted to demonstrator fountain pens. It’s easy to monitor the level of your ink so you’ll know when you need to refill. If you like to use bright, colorful inks a demonstrator pen with a clear, colorless barrel really shows off your ink color. Mechanically minded engineer types like to see how all of the parts that make up the fountain pen function and it’s easier to diagnose pen problems and repair them. Others say that the transparency of these pens reminds them of a crystal. 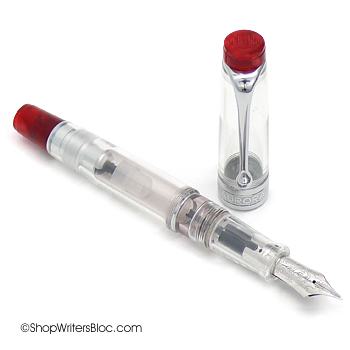 Some demonstrator fountain pens are very luxurious and are only produced as limited editions. One example is the Aurora Optima demonstrator fountain pen that is available as a limited edition of only 1936 pens, corresponding to the year in which the Optima was first introduced. Because this Optima is a clear demonstrator pen, if you look closely you might be able to spot Aurora’s hidden ink reservoir system that allows an extra page of writing when your normal ink supply runs out. 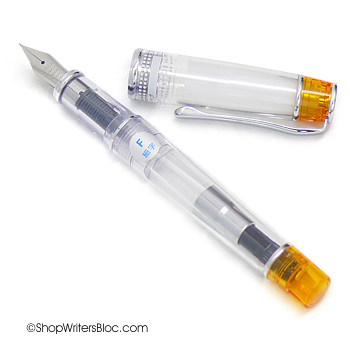 If you like the handsome appearance of the Aurora Optima demonstrator but you aren’t able to splurge on such a pen, an attractive and more affordable alternative is the Pilot Prera demonstrator fountain pen. It also has a clear, colorless body with a colorful contrasting trim on the end of both the cap and the barrel. In addition to red, you can get the Prera with a variety of trim colors, and the Japanese stainless steel fine nib is great especially if you like to write with a very fine line. 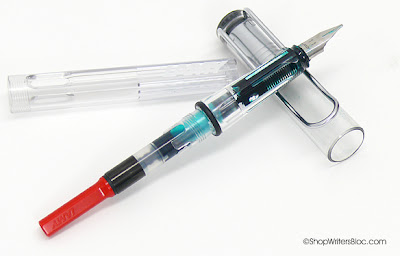 Since demonstrator fountain pens are clear, when they have a cartridge or converter filling system, the appearance of the converter matters. When we use the LAMY Vista, which is the demonstrator version of the popular Safari fountain pen, we like to think of the red top of its converter as the “heart” inside the pen. 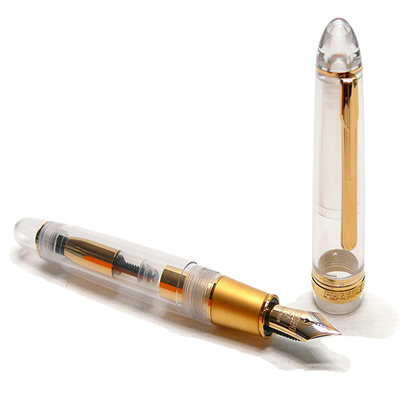 Platinum Pens thoughtfully designed the converter inside this President demonstrator fountain pen to match the color of the gold-plated trim. 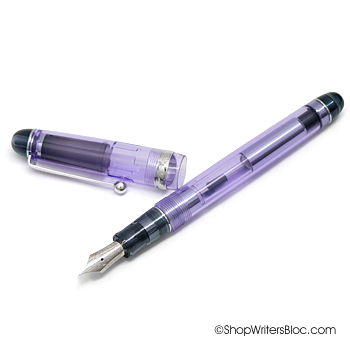 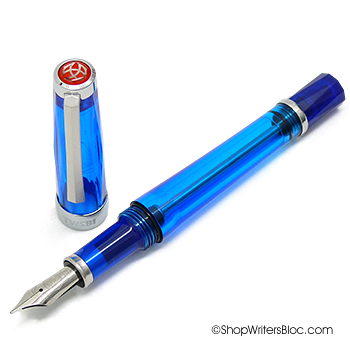 The fact that the TWSBI Vac 700 is transparent allows you to see its cool vintage-style vac filling system in action! I love both the amber orange and sapphire blue versions of this demonstrator pen and it also comes in a mysterious smoke black. 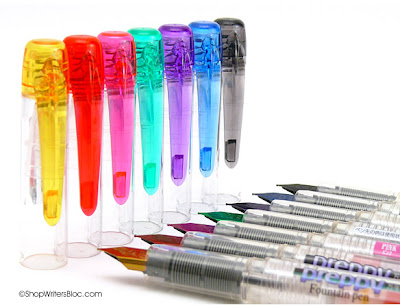 Demonstrator fountain pens don’t have to be expensive. At the time of writing this post, the Platinum Preppy fountain pen allows you to give one a try for only $3.00! Other demonstrator pens that can currently be purchased for $25.00 or less include the Kaweco Sport Ice, Kaweco Sport Classic, Noodler’s Ink Ahab flex-nib pen and the Pilot Plumix student calligraphy pen.

We love Aurora fountain pens! Here are some of our favorite Aurora links:

First, this is a great video on how Aurora pens are made.

Bleubug has some interesting information about a cool vintage Aurora 98 fountain pen with a piston filling knob that extends from and retracts into the barrel with a “click”.

Of course, we have to mention the Aurora Pens Italy website, the mothership of all Aurora pens. See anything you like that we don’t have in our shop? Send us an email and perhaps we can special order it for you.

Check out this detailed diagram (courtesy of Aurora Pens, Italy) revealing the structure of an Aurora Fountain Pen.

An interesting and unique feature of many fountain pens made by Aurora is referred to in this picture: the hidden reservoir system. (However, it seems the diagram above should be pointing to the piston to indicate the hidden reservoir.) Instead of having a flat bottom as most pistons do, the bottom of the Aurora piston has a small indented chamber that holds extra ink. When your ink seems to have run out, turning the piston counter-clockwise all the way down to the feed will push the ink contained in this small chamber into the feed of the fountain pen. Aurora’s handy hidden reservoir system gives you an extra page or so of writing before you have to refill! 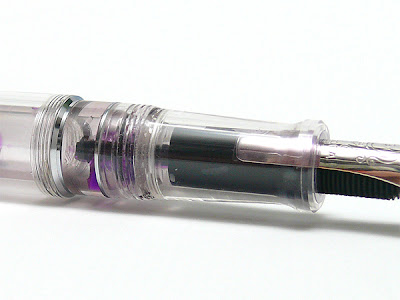 Close-up of the feed on an Aurora fountain pen. There is a small “post” that sticks out. 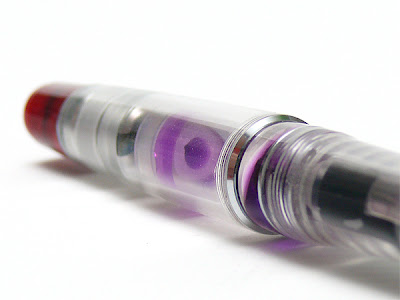 A small reservoir hidden in the bottom of the piston contains extra ink. 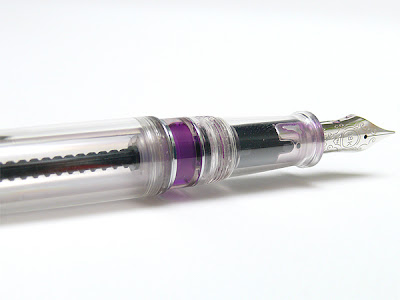 Turn the piston counter-clockwise all the way down to the feed to force the extra ink into the feed. 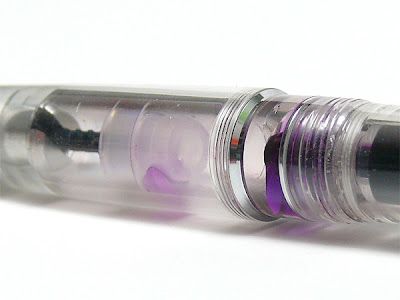 The hidden ink reservoir is now empty, allowing you to write another page. A feature unique to Aurora fountain pens.

Once you’ve invested in a fine quality writing instrument such as an Aurora fountain pen, one of the first questions many people ask is, “how should I take care of my fountain pen?” Aurora Pens recommends both “love and cleanliness.”

To clean your Aurora fountain pen, the manufacturer recommends using exclusively cold water, using water to fill and empty the pen and/or cartridge repeatedly, until the water rinses clean. To clean the outside of the pen you may simply use soap and water and then thoroughly dry the pen.

Aurora advises that to safely clean your fountain pens you should “absolutely avoid any use of alcohol, solvents or hot water which could ruin your pen and compromise its surfaces.” To eliminate any ink stains simply leave the pen in cold water, even for a few days if necessary.

If you should happen to damage your pen from an impact or fall, Aurora has experts that can repair your pen and return it to you as good as new.

As far as the “love” goes, we trust that you already know how to love your fountain pens! We love our fountain pens too! Depending on how you are going to use your pen, it can be helpful to have a nice pen case to store it in.

If you have any helpful tips on how to care for fountain pens we would love to hear your comments. 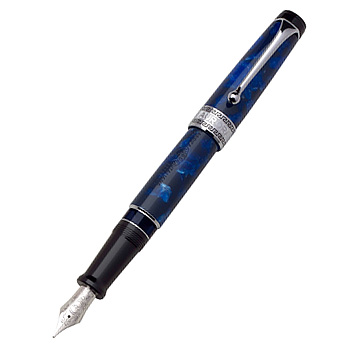 Aurora has been producing finely crafted fountain pens and luxury goods in Torino, Italy since 1919 and has become the most prestigious writing instrument manufacturer in Italy. Aurora was founded by a rich textile merchant who had long dreamed of creating this company and the first true Italian fountain pen. From the beginning, Aurora was known for producing some of the finest made in Italy products using high quality materials such as platinum, gold, silver, diamonds, emeralds and other precious stones.

Aurora’s style combines artistic tradition and Italian design in the production of their writing instruments. Much detailed and skilled hand-work goes into the manufacture of all of their own fountain pen parts including gold and steel nibs. Their line of pens ranges from the fabulous Diamond fountain pen, crowned by an exquisite diamond cabochon and one thousand nine hundred and nineteen "Fourc" certified De Beers diamonds to create the most exclusive, valuable writing instrument in the world, to reasonably priced school pens and everyday pens such as the Ipsilon and Style.

Aurora also manufactures elegant leather goods such as pen pouches, wallets, organizers, handbags and more. They have created a line of paper goods that are an identical reproduction of the paper used in the royal courts of Europe. Aurora wishes to continue to be an interpreter of good taste, technological innovation and all the style that has marked the history of Italian taste, customs and design.

Writer’s Bloc is happy to introduce Aurora Fountain Pens to the collection in our shop.