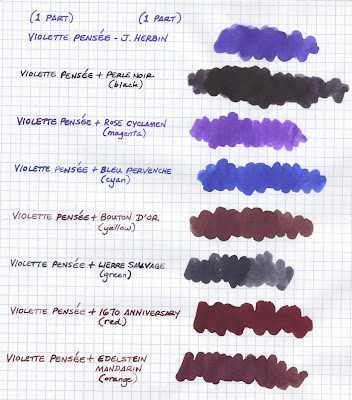 My first attempt at purple ink mixing was a recipe of 5 parts J. Herbin Violette Pensée and 1 part another ink. The results were pretty much all different shades of purple, so I wondered what results I would get increasing the amount of other ink. This new experiment is a recipe of equal parts J. Herbin Violette Pensée and another color of ink. Results were more varied this time.

Violette Pensée and J. Herbin Rose Cyclamen (magenta) together made a purple that is brighter, lighter, warmer and pinker than Violette Pensée on its own. This scan makes it look a lot bluer than it actually is. I used to have a shirt exactly this color in high school.

A rather pleasing royal blue color results from the combination of J. Herbin Bleu Pervenche (cyan) and Violette Pensée.

Violette Pensée and J. Herbin Lierre Sauvage (green) together make an interesting gray-green shade. The scan mostly fails to show the green tint to this mix.

If I was going to choose one of these to mix and fill my pen with it would have to be the Lierre Sauvage combination because of its unusual shade. I like it even though it’s darker and more conservative than the colors of ink I often use. I think I would also enjoy the red-black color of the 1670 Anniversary ink mixed with the purple or the maroon produced by the Edelstein Mandarin.

What is your favorite ink mixing recipe? 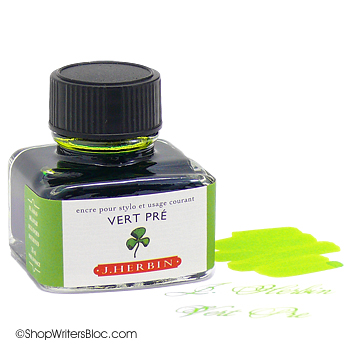 Have you ever thought of using regular, non-fluorescent fountain pen ink as highlighter ink? More than once I’ve heard people wonder why ink companies bother creating fountain pen inks in light colors because when used for writing they can sometimes be hard to read. Besides being good for fans of bright colors, for artwork and for ink mixing, these colors are often valuable for use as highlighting inks! 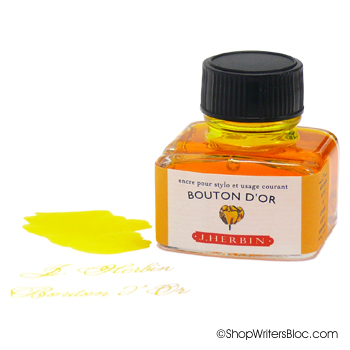 I started out using J. Herbin Bouton d’Or regular yellow fountain pen ink for highlighters since it seemed the most obvious choice from my ink arsenal. I had such good results that I added Noodler’s Yellow to my calligraphy highlighter pens with similar good results. Recently I’ve been using J. Herbin’s Bleu Azur fountain pen ink in my Pelikan Script 2.0mm calligraphy pen and find that it’s the perfect shade of blue for highlighting. 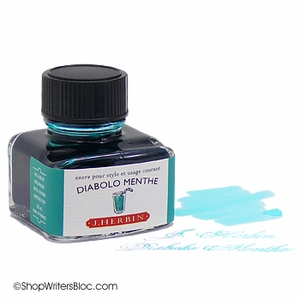 We selected what we felt are the six lightest regular J. Herbin fountain pen ink colors and made some samples for you to take a look at. J. Herbin Bouton d’Or, Bleu Azur and Rose Tendresse are pretty typical “highlighter” colors (minus any fluorescence). Compared to your usual highlighter green, Vert Pré has more of a yellow tone to it and is a fresh, spring green. Diabolo Menthe is a pretty, light turquoise green that’s a fun alternative to regular highlighter blue. Bouquet d’Antan is to pink what denim blue is to blue, it’s kind of a faded, worn pink color that’s more subtle and easy on the eyes than blazingly fluorescent highlighter pinks. (We wish the combination of scanners and computer monitors would depict colors more accurately.)

These are our choices among J. Herbin’s wide variety of inks for use as highlighter colors. What do you think of these ink colors for highlighting? What are your favorite highlighting ink colors? 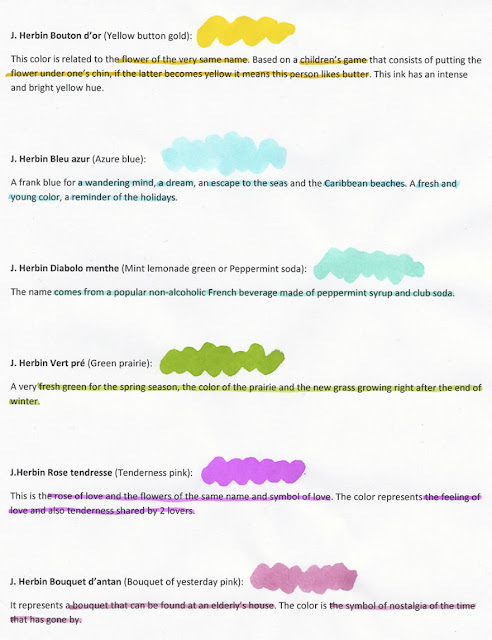 (This sample was made using a laser printer, cheap copier paper, a LAMY pen with a 1.9mm calligraphy nib, and a Pelikan Script with a 2.0mm nib. The ink descriptions come from the J. Herbin website. Sorry, I cannot seem to draw a straight line even if my life depended on it!) 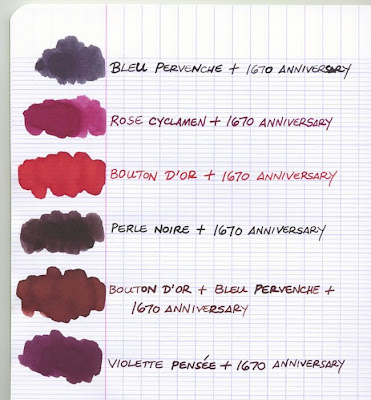 I’m really not quite sure what I expected with this ink mixing experiment, but then that’s what experiments are for, aren’t they? The 1670 Anniversary red ink is one of J. Herbin’s most saturated ink colors, so adding just a touch of another ink color made almost no difference in some mixes, but other mixes offered a more dramatic change. I’m not sure how much you’ll notice in this scan, but anyway here it goes. I used 5 parts 1670 Anniversary red ink and one part of another color of J. Herbin ink. 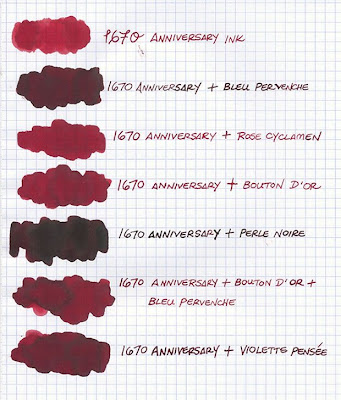 1670 Anniversary ink mixed with Bleu Pervenche made a red-black looking ink with a purplish undertone.

I didn’t notice much of a change to the 1670 Anniversary color when I added Rose Cyclamen to it, however, I can see a tinge of magenta when there is shading.

Bouton D’or also did not change the color of the 1670 Anniversary ink much. If anything, it may have warmed up the color an eensy bit.

1670 Anniversary plus Perle Noire creates a conservative black-red color with noticeable red in the shading.

Adding Violette Pensée to 1670 Anniversary ink also creates dark red, but this dark red is more of a maroon color. This was my favorite new color from the experiment.

What are your favorite red fountain pen ink colors? 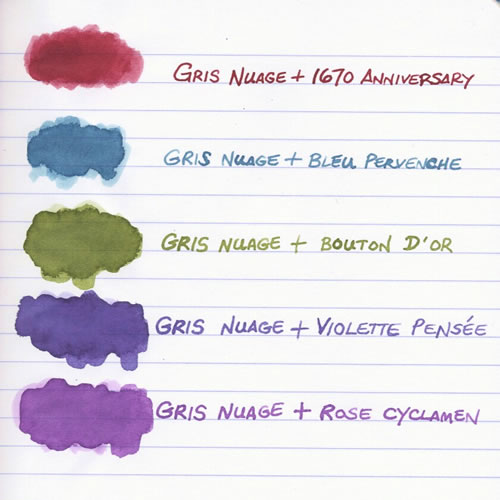 I had some fun the other night experimenting with mixing J. Herbin Gris Nuage grey ink with other colors of J. Herbin fountain pen inks. For this test I used the ratio of five parts Gris Nuage and one part the other color of ink. I used a Clairefontaine Basics notebook for the paper, which held up quite well despite being heavily doused with ink.

Gris Nuage plus 1670 Anniversary Rouge Hematite ink turned out to be a toned-down version of red, not as bright as the 1670 ink on its own. Not a dramatic change, but who would want to change this great red color anyway?

When Bleu Pervenche was added to Gris Nuage the result was a turquoise-grey color. Nice shading in this combination.

The big surprise was Bouton D’or turned Gris Nuage into a great army green color with lots of shading. This was my favorite result and I filled up my Pelikano Junior with this color immediately!

Gris Nuage plus Violette Pensee resulted in a dark purple-grey color as expected.

My second favorite result was the Gris Nuage and Rose Cyclamen combination. This turned out to be a satisfying purple color with pink undertones.